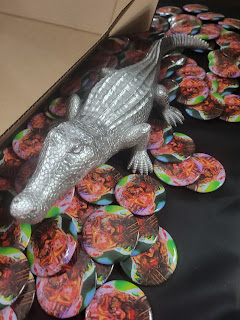 "It's Greg's birthday! Everybody give Greg a hug!" Gabler shouted out for the 4th time that night. Everybody hugged Greg, the author of this blog. But it was not Greg's birthday. Mike made eye contact with me, laughing at the hilarity he had just caused. This is just the Gabler way. He tells stories that have a basis in truth, but are mostly not. But man are the stories entertaining. Gabler is crazy and funny and smart and always in for a good time, especially with good friends. He exudes joy when in his element and his joy is contagious.

Michael, Mike, Gabe, Gäbler (as it's written on everything he has ever owned), Phikeia Yahoo and now #Aligabler ... however you know him, he's a special and exceedingly unique guy. Even his parents call him "Gabler", his last name (or Michael when in trouble).

And Gabler has always been a giver.

So when he announced during the afterglow of winning #Survivor43 that he was giving away the entire $1 million in winnings, while it may have shocked most, it did not fully surprise those who know him well.

He was one of my groomsmen almost 25 years ago, and I told everyone then, "Mike Gabler is the hardest working friend I have." And that sentiment remains. He truly cares about others, about relationships, about staying connected and feeling known. 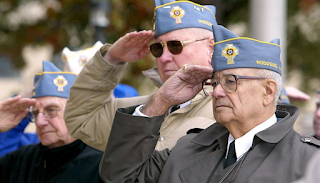 It was rightfully his and his family's. Does he have a daughter in college and another daughter who'll head to college soon? Yes. Could he have used that $1 million for a long list of things that his family and friends might need (or at least want)? Yes.

But Mike Gabler saw outside of himself. He saw Veterans, 44 of whom commit suicide every day. Every. Day. Veterans suffer from PTSD (Post-Traumatic Stress Disorder), they face financial hardship and homelessness, they are disabled, and the list goes on with challenges that plague our heroic veterans. They've served us, willing to risk all for their fellow Americans, and Mike saw the tremendous need.

Serving those who have put their lives on the line for our country, and in doing so have provided the very freedoms we often overlook or take for granted, they deserve our attention and care.

"There are people who need that money more, and I'm going to donate the entire prize — the entire million-dollar prize, in my father's name, Robert Gabler, who was a Green Beret — to veterans in need who are recovering from psychiatric problems, PTSD and curb the suicide epidemic."

Gabler, without hesitation, gave to those in desperate need. No dry eye was in the room. And there was no veteran within earshot who was not metaphorically saluting in gratitude for Mike's show of gratitude to them and the sacrifice they made.
My family and I had the honor of being there at the final #Survivor43 watch party, together with his family and a few other friends. And - amazingly - he did not spoil the results. He kept the fact that he had won on full lockdown. Pretty impressive given he could have easily hinted or slipped up during the party ...  not to mention the 6+ months since the filming of the show. Only he, his wife and his sweet daughters knew. So, when Aligabler (in contrast with the real-time Mike Gabler who we were with) was announced as the winner of Survivor 43, his face was priceless.
"Who knew?" was what that face said, with eyebrows up, and an "I'm as surprised as you are" grin across his mug. Incredible.
No doubt, Mike Gabler deserves all the applause for this act of generosity. He did not use the fact that he planned to give it all away in order to win. He kept that news a secret until after he'd won the contest on pure merit - for playing the game masterfully. As Mike said, "It would have been hollow" if he'd used that fact to pull on heart strings.
So, he waited. It needed to be after he'd won and ... to make a wonderful act of generosity even more wonderful, he shared credit with his Survivor43 competitors.

"We're gonna save lives, we're gonna do something good... Million dollars is going to them. We made history guys," he said.

People inherently know this is good and right. People inherently know this is the ideal to strive for. People inherently know this is how we need to be.
As I cried like a little baby, hugging Mike's wife on one side and my own wife on the other, I could think of nothing other than, "This. This is so gorgeous. This is so beautiful. This is how it's supposed to be."
The absolute joy on Mike's face ... the joy on everyone's face ... was palpable. The sense of goodness flowed through the living room area of his sister's family's house in which we viewed this all unfold.
And my mind immediately went to how overwhelmingly generous our God is. This night - Gabler's act of giving - was just a small glimpse ... a reflection of what God did for us. Giving of this caliber seems almost unworldly. It humbles and convicts us. I know it convicts me. "I need to be this way - so open-handed, so generous, so selfless." And that realization is spot on. We do need to be this way.
Thank you Mike Gabler for reminding me of Jesus. Thank you for making me think of the greatest act of giving in all of history. As we come to the final lap of Advent and see Christmas Eve just up ahead, we must stop, consider, meditate on what the Creator God of the universe did: He entered time and nature. He came as a babe born in poverty. He took on a humble form, lived in that humility coupled with full selflessness and righteous perfection, then died for his enemies so that they could be saved from the judgement they rightfully deserve. He paid the price for the very people who had turned away.
This is the reason we celebrate Christmas: Because God so loved the world that he gave His only son, that if we simply put our trust in Jesus and His sacrifice for us, calling him our Lord, we would never perish but have everlasting life. What a gift. What an amazing act of grace.
Merry Christmas #Aligabler, my good and exemplary friend.
Thank you for showing us all how to walk in the joy of giving.

Greg Dean is founder of HowGiving.org and author of Giving: A Humble Plea to the Western Christian. Greg is a lover and follower of Jesus Christ, a humble husband and father, and has had the honor of calling Mike Gabler his friend for greater than 30 years. Soli Deo Gloria
Posted by Give Instead at 1:59 PM